A virtual pilgrimage of the major Lasallian historical sites in France, with Brother Gerard Rummery as your guide

The purpose of the site is to build interest in St. John Baptist de La Salle, his life and his charism. Visitors will be able to explore the places in France where St. John Baptist de La Salle lived and brought the Lasallian mission to life. This is a beta version, and further information and elements will be added to it as these become available or desirable. Those involved in Lasallian ministry may learn about De La Salle and his life in a variety of formats and in whatever time increments are available. The hope is that visitors may return again and again to learn more about him or to see what new features have been added. This website includes several media to help you learn about the life and travels of De La Salle, including: videos, photographs, maps, panoramas, a timeline and descriptive text about each important location.

There are a few of different ways to explore the site, based on preference or intention. There are different levels of engagement with the material, from cursory to in-depth.

Use the map of France to locate areas of interest by city.

Scroll through the chronology of major events in his life and follow the links that interest you.

You may first read a short biography of the man, so that you have an overview of his life’s circumstances and highlights. Doing so will help you scope out the general scene before you jump into the middle of it all.

Visit a specific location and learn the Lasallian history associated with that place. Choose from the cities and spots on the top menu. Be sure to view the videos featuring Brother Gerard Rummery, FSC—one of the most noted De La Salle historians. Another unique element focuses on De La Salle’s vocational journey at each important location, encouraging reflection on De La Salle’s experiences compared with one’s own vocational experiences and ongoing journey. This part of the website may also be used by Lasallian study groups.

This project emerged from the initial DVD project In the Footsteps of De La Salle. Through a proposal made by Br. George Van Grieken, FSC, and with the support and involvement of Br. Gerard Rummery, FSC, and Br. Roch Dufresne, FSC. This proposal was submitted to the visitors (RCCB) of the Lasallian Region of North America who approved the undertaking in December of 2008. Subsequent trips to France by Br. George and Br. Roch laid the groundwork for the filming in France with Br. Gerard in July of 2009. Post-production of the DVD was extensive, and the project was completed toward the end of 2010.

Subsequently, Br. George made a proposal to the Lasallian College and University Presidents (LACUP) for a further development of this project onto the internet. They saw the potential in the idea and agreed to provide the funding required. Over the next two years, Br. George worked with Al Cassidy to translate and expand the experience onto the internet for an interactive audience. The site was launched on May 15, 2012, the traditional Lasallian day when we celebrate the life and charism of St. John Baptist de La Salle, Patron Saint of Teachers.

In early 2018, the entire website was redesigned so that it might be enjoyed on any digital device, from the desktop to the mobile phone. It became a responsive website made available for exploration by students and teachers, parents and board members, along with the general public. The work was done by the original designer, Al Cassidy (alcassidyart.com),and the original producer, Br. George Van Grieken, FSC. For further information about the Lasallian charism, go to the website of the Lasallian Resource Center www.lasallianresources.org where this present website is listed along with many other resources.

The Explore Further section within each location offers additional information on places related to specific locations that are covered in the site. Feel free to submit suggested hyperlinks or additional elements that will enhance a visitor’s experience to this website.

This website was originally made possible through the financial assistance of the Lasallian Colleges & Universities in the United States. The videos were sponsored by the Christian Brothers Conference and come from a DVD and booklet that are sold separately on their website. 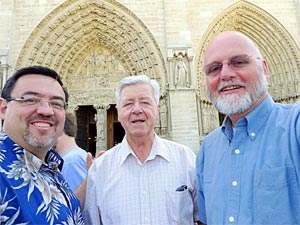 This project came about because of a proposal made by Brother George Van Grieken (then of the San Francisco, California, District of the Brothers of the Christian Schools) to Brother Gerard Rummery (world-renowned Australian Brother) and Brother Roch Dufresne (then Director of Video Productions, Cathedral High School, Los Angeles, California) to document and film an introduction to the major historical sites in France associated with the life of St. John Baptist de La Salle, Patron Saint of Teachers and Founder of the Institute of the Brothers of the Christian Schools.

All involved were excited about the idea, and a detailed proposal was drafted for the Brother Visitors of the United States-Toronto Region (RCCB), who subsequently approved the undertaking in December of 2008. Scouting Lasallian sites in France was accomplished by Br. George and Br. Roch during Easter Week 2009, and filming commenced in July 2009, taking place during ten days in July of 2009. Post-production became quite the task (as it always does), and the Q&A component required the addition of another DVD. The entire film project was finished in September of 2010, and the accompanying booklet was completed by July 2011.

Many Brothers and communities throughout France were very generous with their help and hospitality. They illustrated and exemplified the reasons behind and the value of a project such as this. Lasallian education and the movement begun by De La Salle continues to be a living witness to the enduring power of what real faith and zeal can do when wedded to the Gospel and to dedicated individuals.