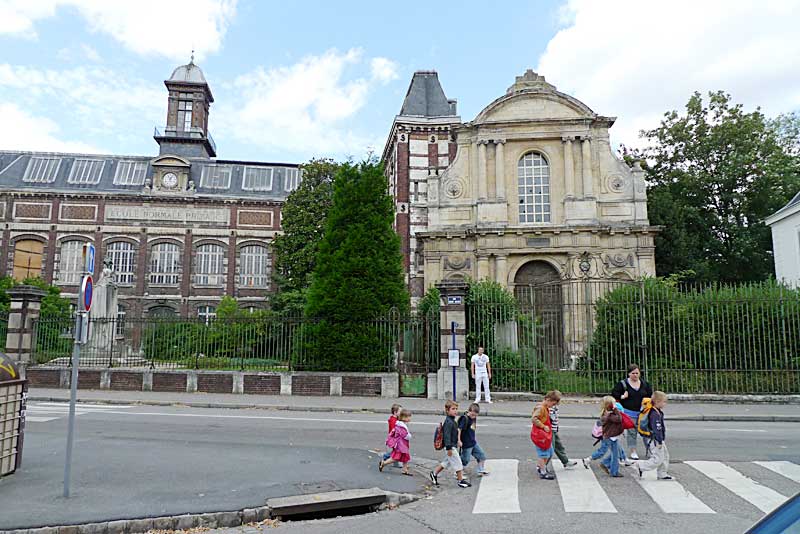 St. Yon became the foundation of the Brothers in Rouen and the center of the Institute for many years. 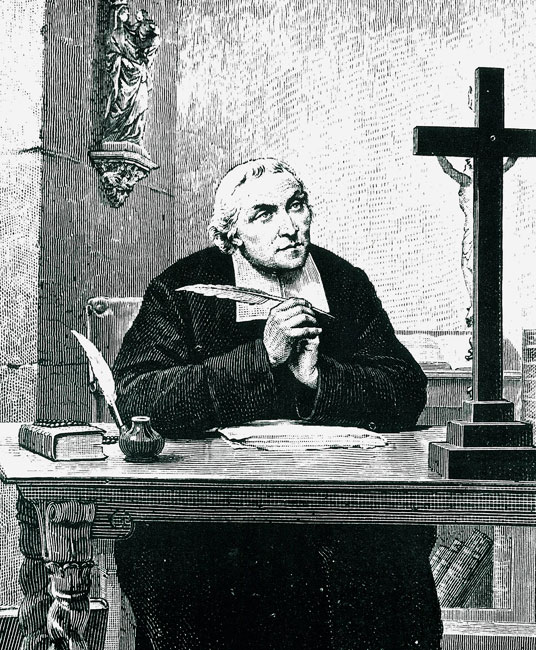 De La Salle wrote much of the Rule of the Brothers here at St. Yon

De La Salle purchased this property in 1705 to be used as a boarding school and spent the last years of his life here. Harassed on all sides in Paris by the ecclesiastical authorities and by the Writing Masters, the Founder decided to move the headquarters to the Institute from the capital. He had discovered, in the outskirts of Rouen in the suburb of St. Yon, a large house and property for sale or lease. On August 11, 1705 he rented this property from the owner, the Marquise de Louvois, and on the 31st of the same month Br. Barthelemy and the few novices who remained took possession of the house. 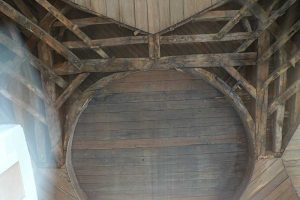 Ceiling of the original chapel at St. Yon in Rouen.

For 35 years previously, it had served as a holiday and convalescent home for the Benedictine nuns of St. Amand. The nuns were generous enough to leave the chapel completely furnished. It was an ancient lordly manor, and had been known as St. Yon since 1615. It is situated near the banks of the Seine in the St. Sever quarter of town. The vast buildings stretched over an enclosed ground of some 16 acres, planted with large trees. 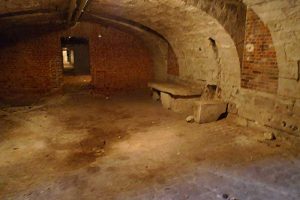 When not detained in Paris on business affairs, it was to St. Yon that De La Salle loved to return. It was at St. Yon that he hastened to re-establish the annual retreat that had been practiced with success at Vaugirard and at La Grande Maison. Every year, all the Brothers from the northern communities spent the month of September in St. Yon to vacation and to make the annual retreat. The spacious grounds were a welcome change from the cramped conditions in which most of the communities had to live. St. Yon also served as a house where Brothers could come for physical relaxation on weekends as well as the renewal in a retreat conducted by De La Salle. It was at St. Yon that De La Salle was to write the Meditations for the Time of Retreat.

Start of a School 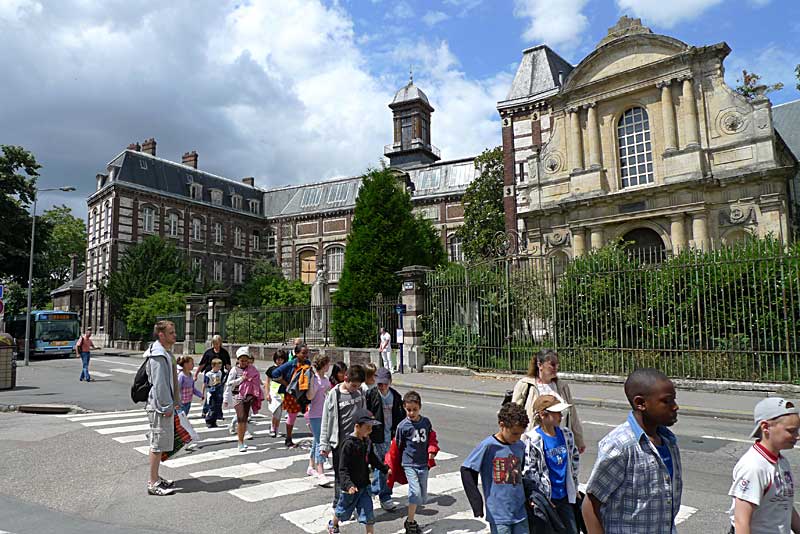 St. Yon in Rouen. The chapel on the right dates from De La Salle’s time.

The parish priest of Saint Sever had earlier feared that the Brothers’ chapel of St. Yon might prejudice his own collection and therefore imposed impossible obligations. Instead, De La Salle offered to open a school which had been closed for lack of competent teachers. The priest accepted. Anxious to recognize the Norman hospitality, he re-opened this free school that had been founded originally in 1687. The young Brothers did their practice teaching in this school. 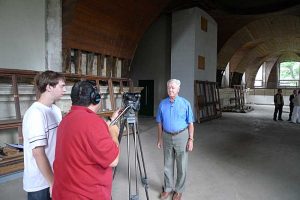 Filming in the top level of the original chapel at St. Yon in Rouen.

From 1705 forward (with a brief interruption at the beginning) until 1771, St. Yon was the heart and center of the Institute. Besides the Brothers and Novitiate, St. Yon came to have three distinct establishments: a boarding school, a school for unmanageable children, and a house of correction.

During the years of operation, 92 communities were established up and down the length and breadth of France. Between 1728 and 1790, in the cemetery of St. Yon, 115 Brothers were buried. The very first was a young Brother of eighteen, Br Chryseuil “mort en odeur de saintete” says the register. 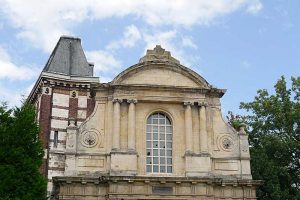 In 1705-1706, middle-class families, particularly of the commercial world, asked  De La Salle to take boarders. He agreed and did so all the more readily since the resulting small income would help maintain the novices and the extremely poor Brothers in the free schools of Rouen. According to a school “Regulation” (prospectus) of 1750, subjects taught included: grammar, math, military art, accounting, bookkeeping, catechism, and drawing as an option. For some pupils, there was also: hydrography (water mapping), mechanics, calculus, music, and living language. A supplementary fee was charged for advanced courses (e.g. special math). History, geography, French literature, rhetoric, architecture, and music formed secondary teaching. The sciences claimed the greatest success.  From 1780-1790, there were 300-500 pupils in the Boarding School, aged 8 – 16 years. The French Parliament adopted this form of teaching for the whole of France 150 years later.

New buildings were erected, and De La Salle took charge of boys sent here by their fathers as to a reformatory. These boys were engaged in the same studies as the other boarders, attended the same prayers, but ate at separate tables. As their behavior improved, they could join the division of the “free” boarders. 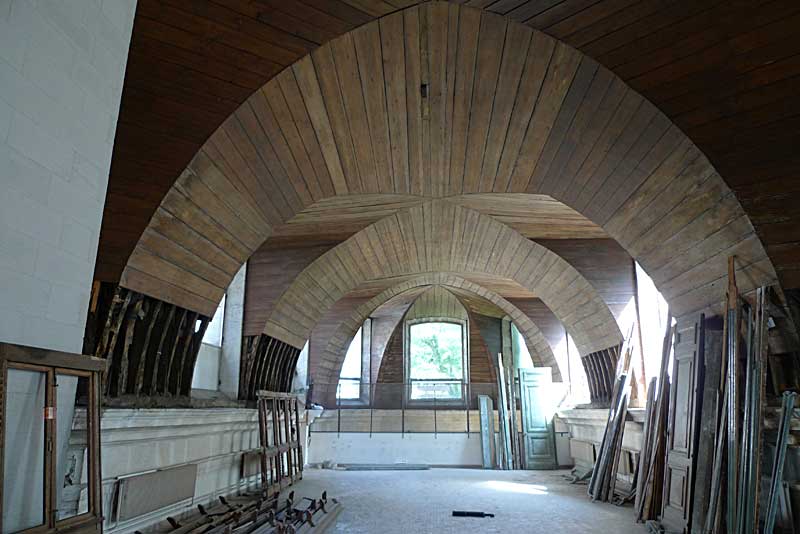 Ceiling of the original chapel at St. Yon in Rouen.

The success of the Brothers in this re-education facility led the president of the Normandy Parliament to hand over to De La Salle a “detention center” or house of correction. The House of Correction at St. Yon was to receive individuals deprived of their liberty by king or court. These young men–the “enclosed ones”–were sent here instead of to prison, and had caused some scandal or had compromised their family’s position and reputation. Mature men were also here to avoid the shame of imprisonment to their social position or family name. They included nobility, priests, religious, upper and middle-class people, and some mentally deranged. They assumed the names of saints upon entering, thus ensuring their anonymity. In this detention center, they had cells and places of isolation for as long as was needed. As they improved, the young men were allowed to: keep birds, cultivate flowers in window boxes, follow courses in geometry, drawing and architecture, and gain access to the gardens and workshops. On arrival, they were first deprived of anything with which they could commit suicide. They took recreation in groups of 10 or 12, supervised by a Brother. They attended religious exercises together (but separately from the boarders). Rioting was always a possibility. Division walls existed only between the enclosed ones and the others in St Yon. 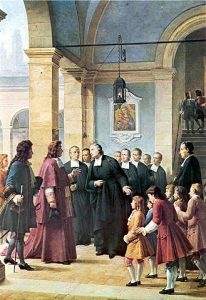 Visit to Saint Yon of the Archbishop of Rouen, son of Louis XlV’s minister Colbert, accompanied by Pontcarré, president of the Normandy parliament.

Unreasonably, the parish priest (Curé) of the neighboring St. Sever insisted that those sent to St. Yon by an order of Parliament should be taken to the parish church for Mass and other services. De La Salle said this was impossible and insisted that the parish priest could visit the school instead. After the Curé’s protests to the Archbishop of Rouen, De La Salle’s permission to hear confessions was withdrawn. Still mortifying himself, De La Salle was commanded by his confessor to cease from abstinence.

Sometime later, his head was badly injured by a door that fell upon him, resulting in violent head pains. Confined to bed, he rallied and rose to celebrate Mass on the Feast of St. Joseph, to whom he had a special devotion. On Wednesday of Holy Week, De La Salle received Communion, having been lifted from bed and dressed in his soutane and cotta. The next day, he was anointed by the Curé of St. Sever, the same one who had caused him so much trouble. At the desire of Brother Bartholomew, the Superior, De La Salle blessed him and all the members of the Order. His last words were: 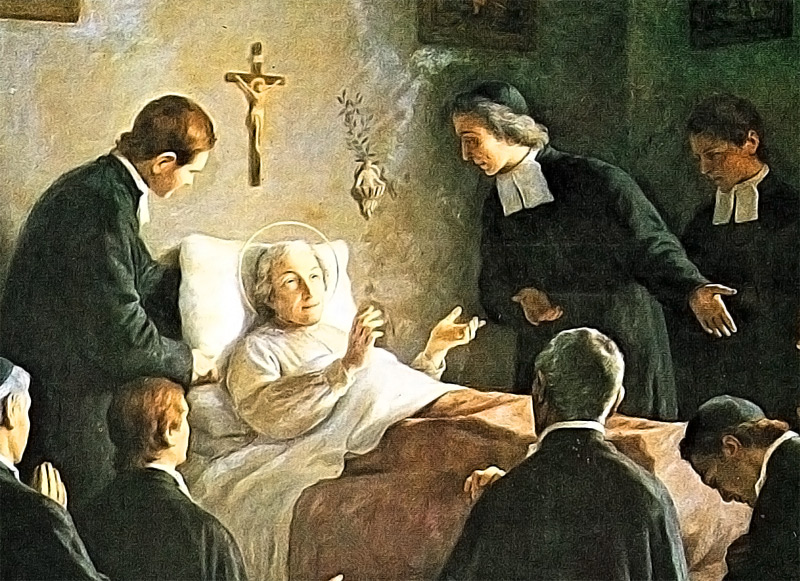 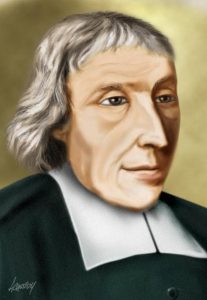 Toward 4:00am Good Friday, April 7, 1719, John Baptist De La Salle made an effort to rise from his bed as if to greet someone, then joined his hands, raised his eyes to heaven, and died. His body was laid in the Chapel of St. Suzanne in the parish church of St. Sever at the insistence of the Curé, despite previous quarrelling. The body was laid under the side altar on Holy Saturday. In 1906, De La Salle’s relics were transferred from Rouen to the then Mother House at Lembecq-Les-Hal, Belgium, and then in 1937 finally to the new Motherhouse in Via Aurelia, Rome.

About 18 months later Br. Bartholomew also died at St. Yon and was buried near De La Salle in St. Sever.

Once Brother Timothy became the new Superior General, he secured the Letters Patent in 1724, which gave the Institute legal existence in France. The Bull of Approbation was received in 1725, which gave it the recognition and protection of the Holy See. Brother Timothy then set about making St. Yon—the Mother House in Rouen—a worthy center of the Institute.

Brother Timothy began immediately by constructing a suitable chapel. Most of the work on this was done by the Brothers themselves, the saintly aristocrat, Brother Irenee, taking a special pleasure in doing the work of an unskilled laborer. The chapel, quite a handsome building, was completed in 1730, and was dedicated to the Holy Child Jesus under the invocation of Mary Immaculate, St. Joseph and St. Cassian. 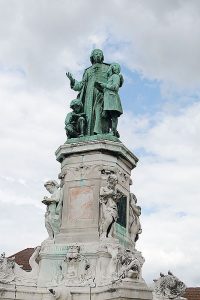 Statue of De La Salle at the Place St. Clement in Rouen, at the corner of the former St. Yon property.

In 1950, at the request of former pupils of the Brothers, the municipality changed the name of the nearby square “Place St. Gervais” to “Place Jean Baptiste de La Salle.” 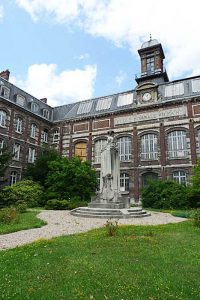 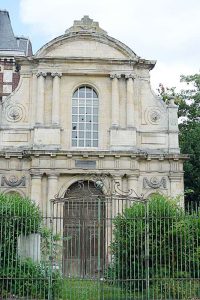 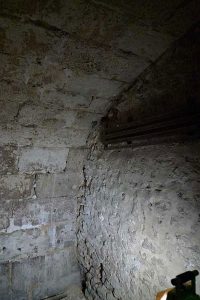 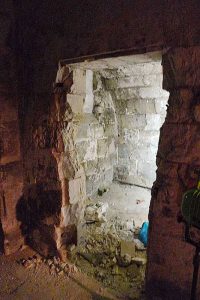 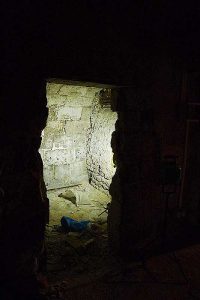 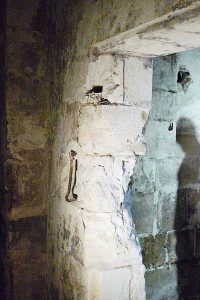 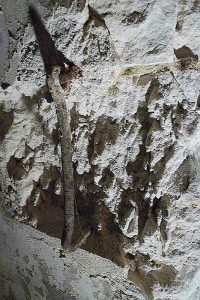 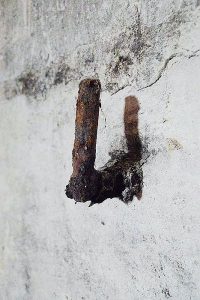 Panoramic view inside the original chapel at St. Yon